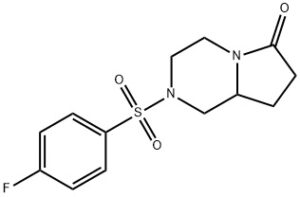 Unifiram (DM-232) is an expiremental  drug belongs to nootropic drug of racetam family ,which has antiamnesic effects in animal studies and with significantly higher potency than piracetam

The racetams are structurally similar compounds, such as pramiracetam, oxiracetam, coluracetam, and aniracetam, which are often marketed as cognitive enhancers and sold over-thecounter. Racetams are often referred to as nootropics, but this property of the drug class is not well established. The racetams have a poorly understoodmechanisms of action